How Can I help You?

“How can I help you?” is a photo documentary project on call centres and the daily life of their employees, focused on the two biggest markets in this industry, India and the Philippines. Together they employ more than two million people who are supporting clients in the USA, UK and Australia.

With this project I want to reveal the lives of these faceless people with whom we may communicate on a daily basis without knowing much about them. In India and in the Philippines, call centre workers mostly work on night shifts due to the time difference to the countries they are in touch with. Therefore, they are immersed in a westernised culture. They work 6 days a week, 10 hours per shift. Aged between 18 and 35, these workers are mainly students or recent graduates who could not find a job in their field. Nonetheless, there are also people in their 40 Ìs who have developed a career in this business.

The “boom” of call centres in both countries has changed the prospects of the younger generations. Now they earn enough money to live their own lives, look after themselves and help their families.

India joined this industry in the mids 90 Ìs and quickly became the world leader. Despite earning as little as 100 to 500 USD per month, to work in a call centre is seen as a good opportunity, in a country with more than 1.7 billion people, where it is difficult to find a job and the wages are low.

In the Philippines, that overtook India in 2011 and became the new leader, an agent earns from 200 to 1000 USD/ month. This can be as twice or three times more than a nurse working in a Hospital, for instance. Unlike India, youngsters in the Philippines consider starting these jobs at an early stage without finishing their education. This could bring in the future to a shortage of professionals in vital jobs such as doctors, lawyers or engineers.

The business is helping to boost these economies, but there is a question mark about the future due to the technological development, which is likely to replace the human work. In addition, these companies are always willing to find cheaper outsourcing work and keep moving from country to country.

They are now behind the phones but one day they will be replaced by the same technology. I want to leave a legacy and to give a face to those workers who - in a western view - have only a voice. 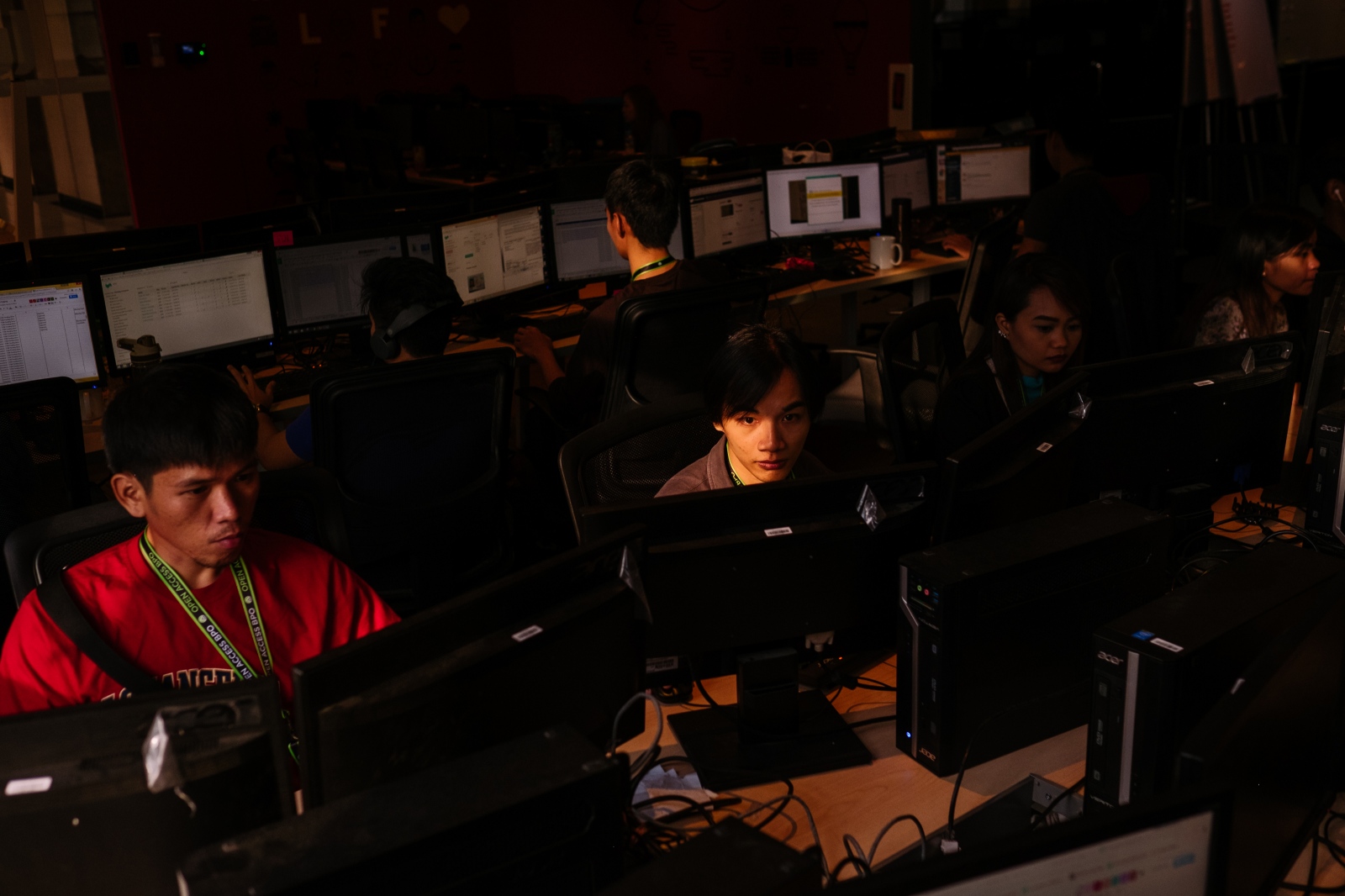 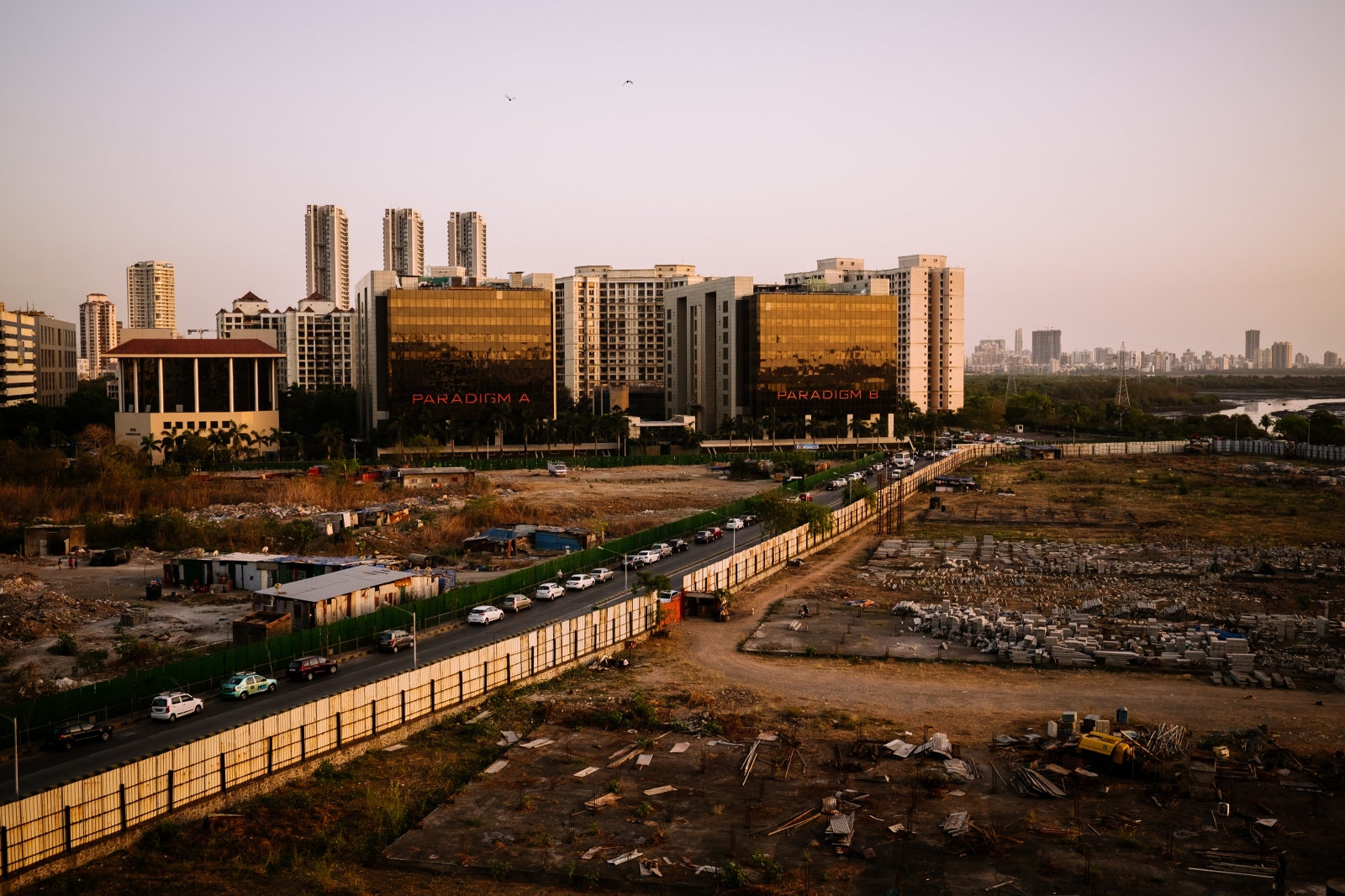 2 / 24
“Paradigm A and Paradigm B”. The view of two call centre buildings in Malad, the biggest hub from Mumbai where even more call centres are being built. Mumbai, India. 21st March 2016. 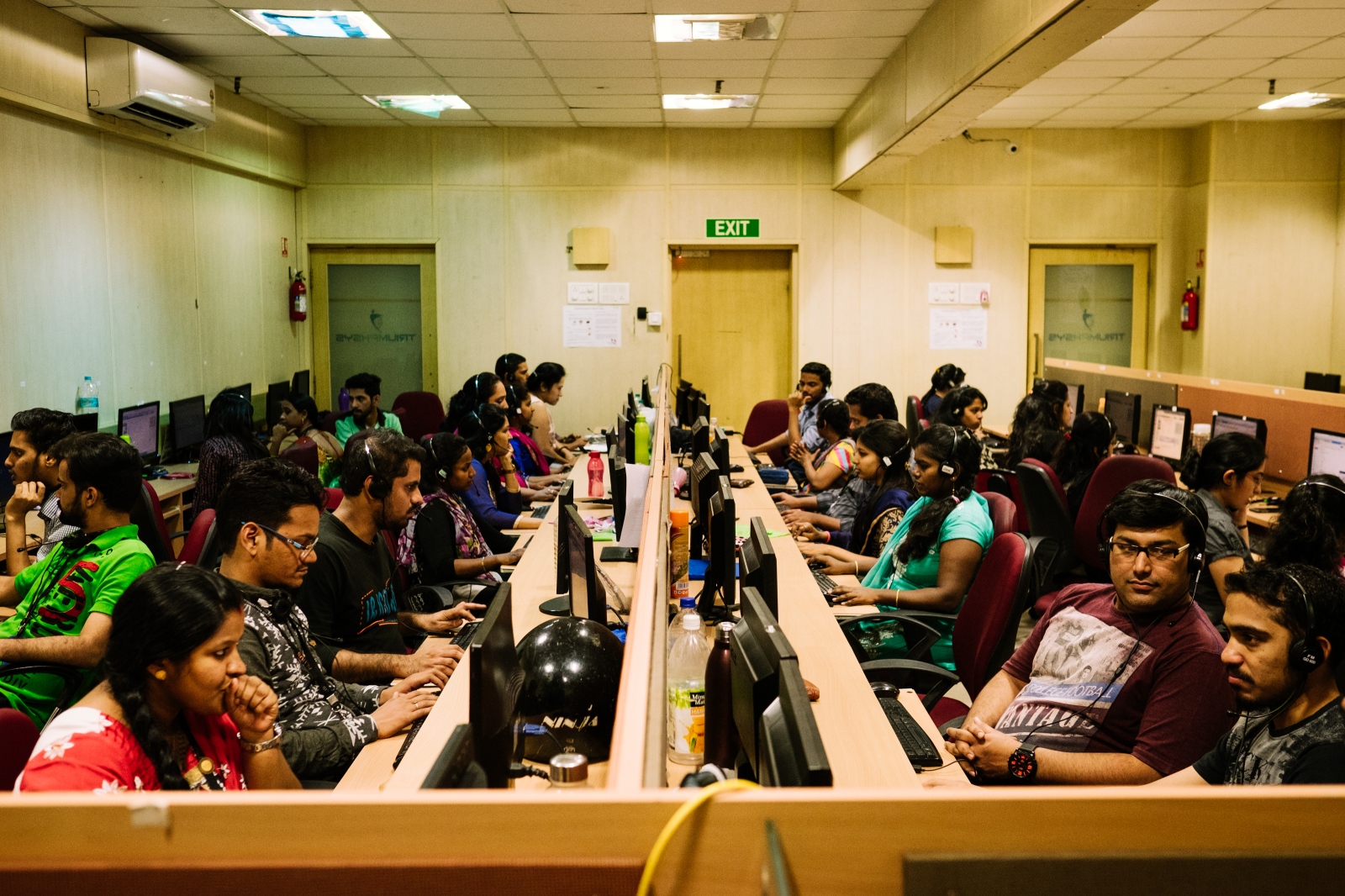 3 / 24
One of the working rooms of Altius, a call centre company based in Navi Mumbai, calling during the day Indian and Middle East based costumers. During the night they call and answer calls from the USA and the UK. Navi Mumbai, India. 8th March 2016. 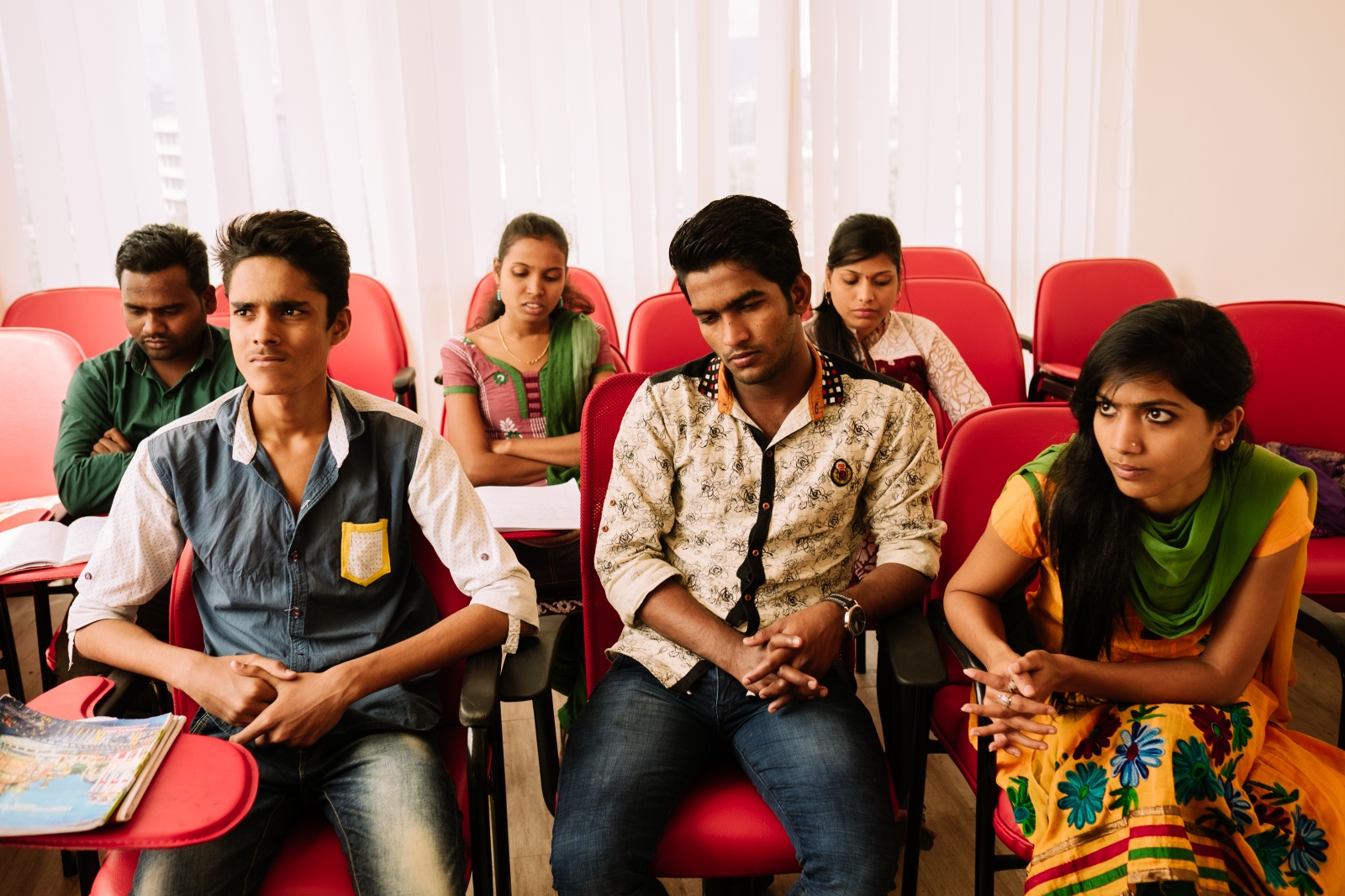 4 / 24
Young Indian agents in a training room listening to their recordings in order to improve their call quality. Thane, Mumbai, India. 25th February 2016. 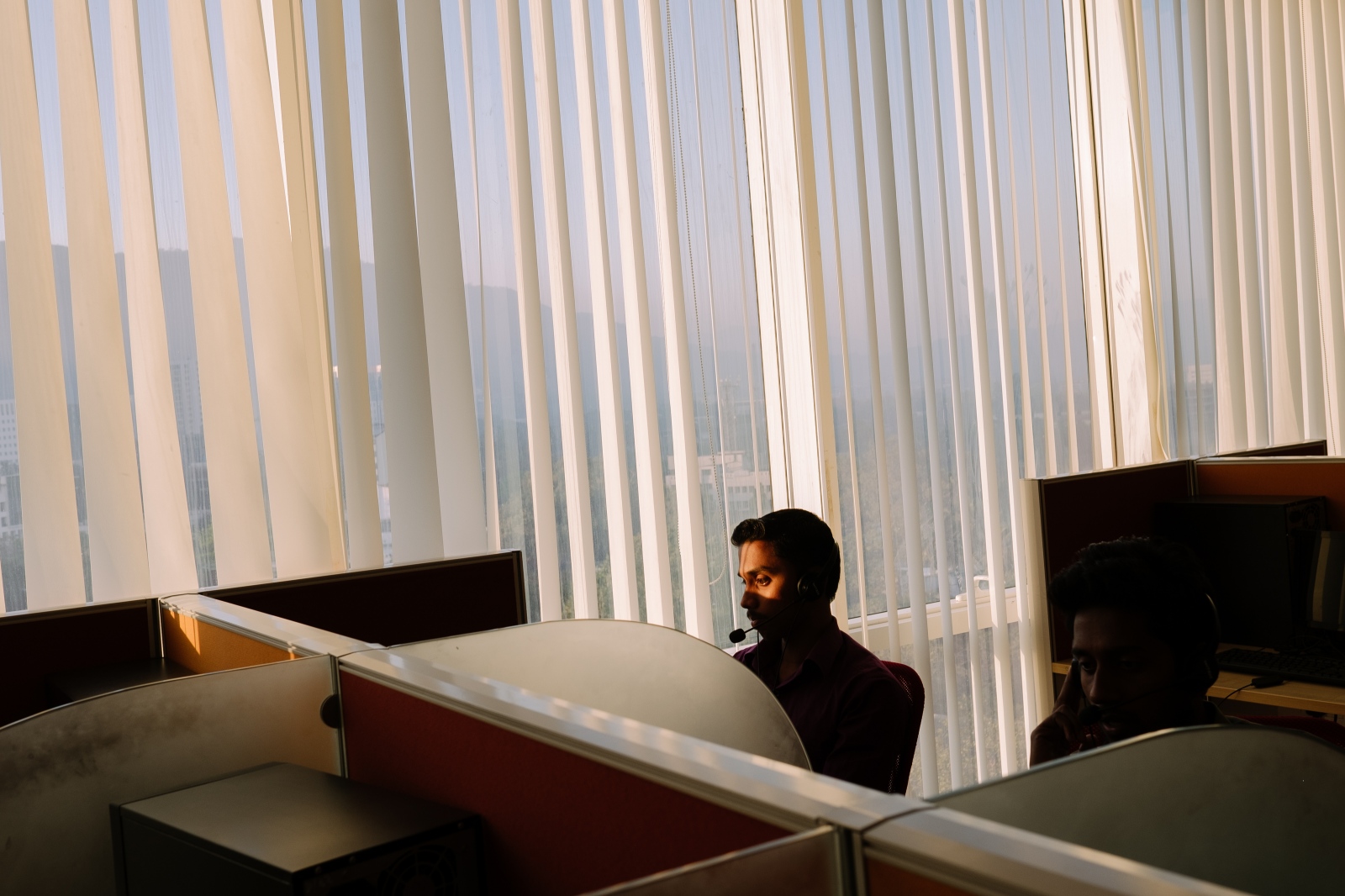 5 / 24
A call centre agent working for an Indian account at day time in Thane, a city on Mumbai´s suburbs. Call centre agents earn an average of 200 USD a month when working on domestic accounts. However an agent can earn twice as more when making international calls.
Thane, Mumbai, India. 23rd February 2016. 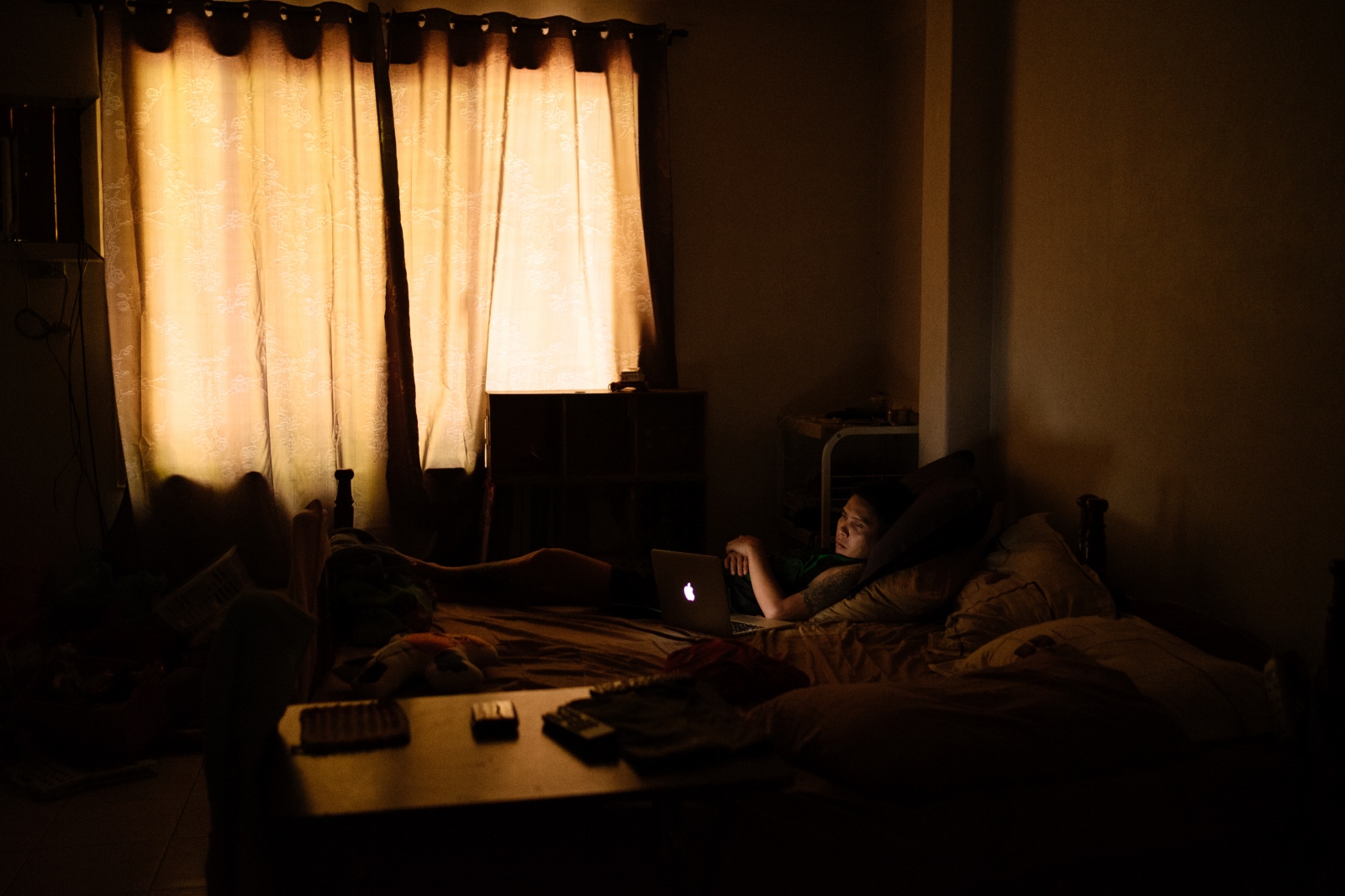 6 / 24
Ian, 33 years old, is about to go to sleep at 10 o´clock in the morning, 10 pm in the USA. He works for a call center from his home, something more and more common in the Philippines.  He considers that call centres are “economically speaking, a big player and help our economy to grow and to increase people´s purchasing power.” On the other hand, he wonders about the future, due to young people quitting their University studies to start working in a call center for the easy cash. Manila, Philippines. 27th April, 2016. 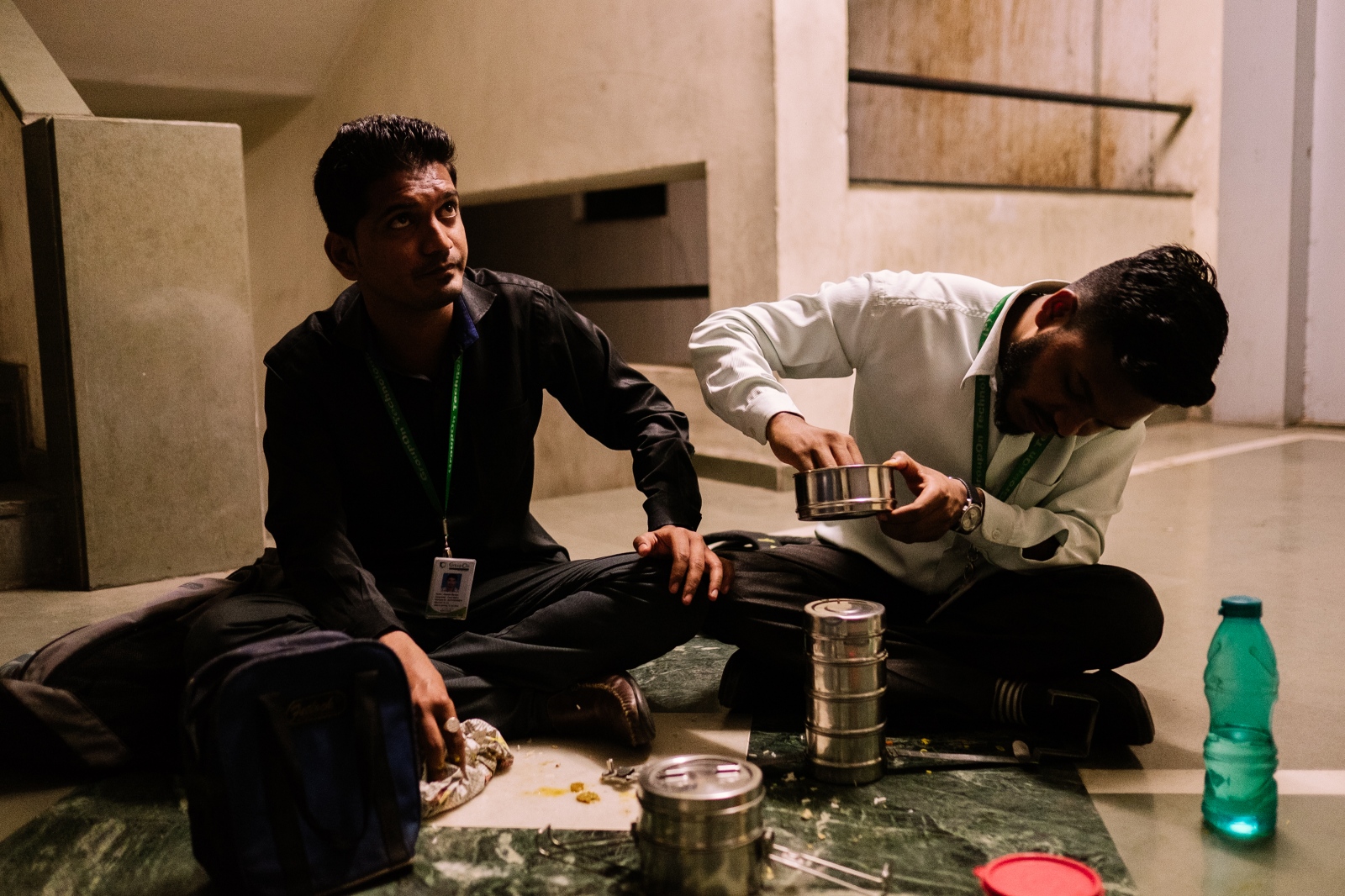 7 / 24
Call centre workers having dinner around 1 in the morning during their break. They started their shift at 10 pm and finished working at 6 o’clock in the morning. Due to working for the USA on a daily basis, their working schedule follows American time. Pune, India. 5th May 2016. 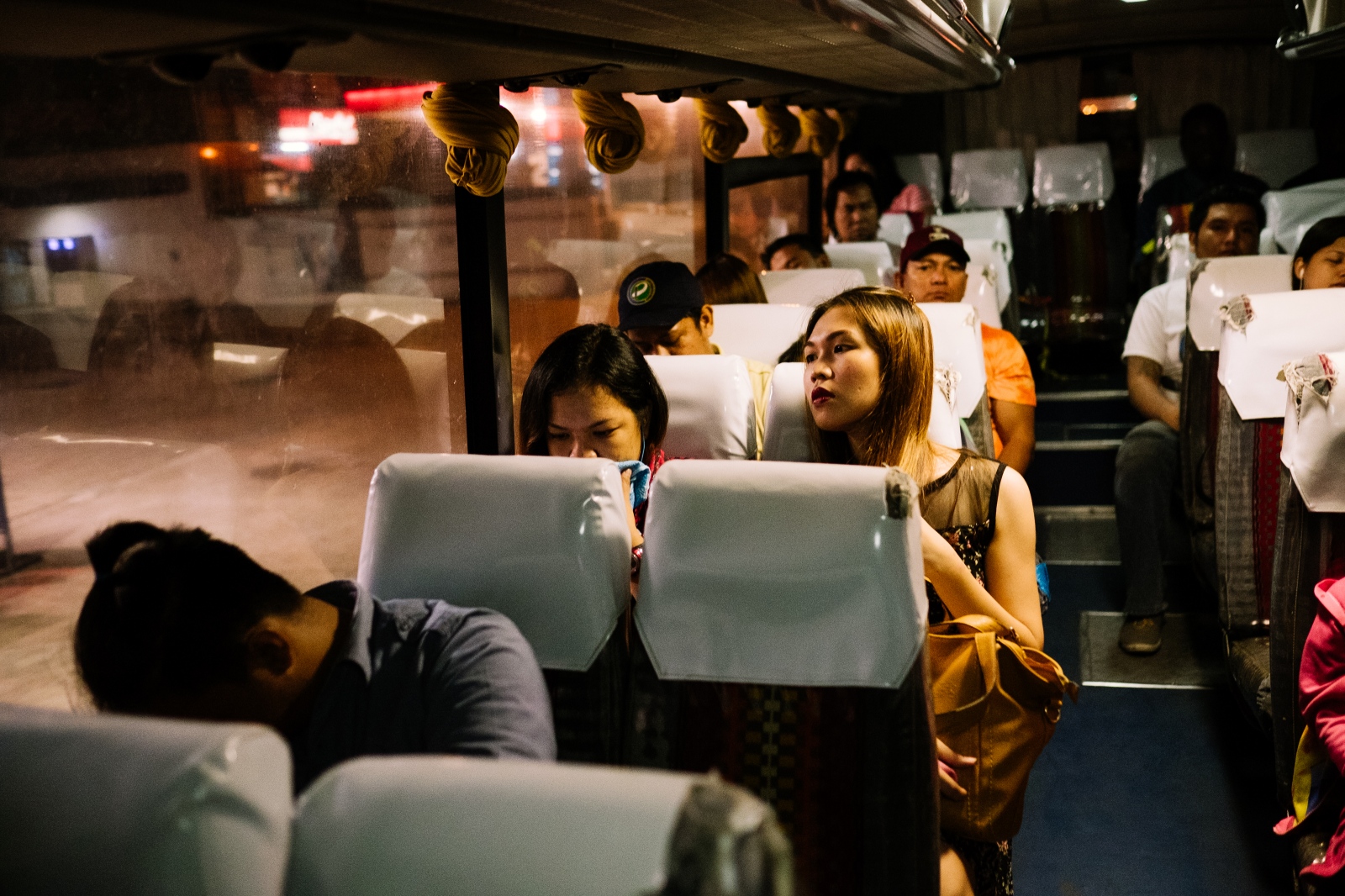 8 / 24
Bessie, (Rachel), 32 years old, on her way to work. “One  of the reasons why I like to work at night is the fact I face less traffic on my commute. During the day the buses are so crowed that you can barely find a seat.” Manila, Philippines. 25th April 2016. 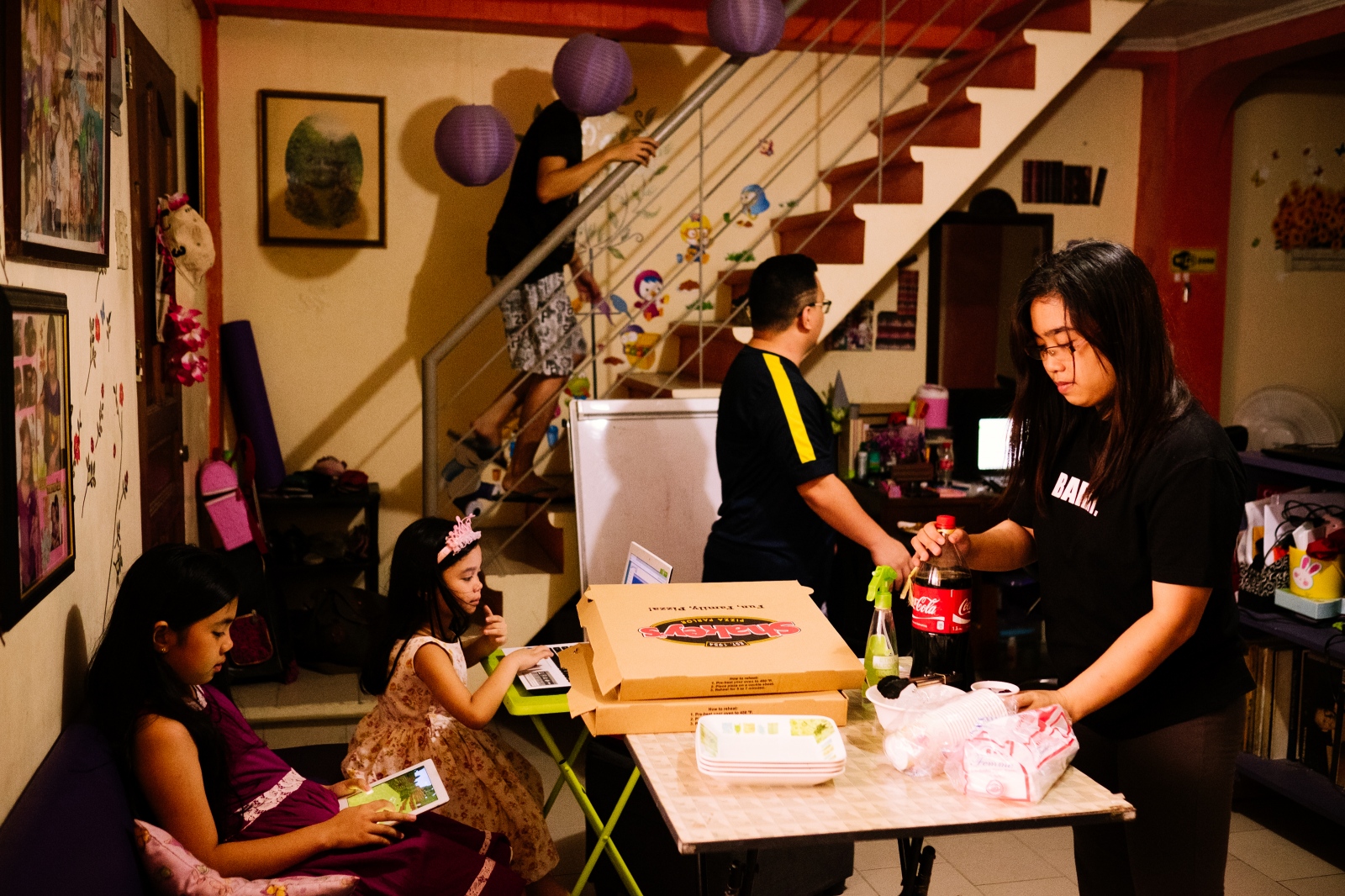 9 / 24
Honey, 32 years old, is getting her fast food ready for a family lunch. She works for a call centre company from home as well as her husband who works for an international outsourcing company. She has been working in this industry for the past 6 years, the last 2 years teleworking. This changed her life style: “It helped me to become more effective, not just in my job but also being a mom to my kids and a daughter to my mom who lives next door.” Quezon City, Manila, Philippines. 22nd April 2016 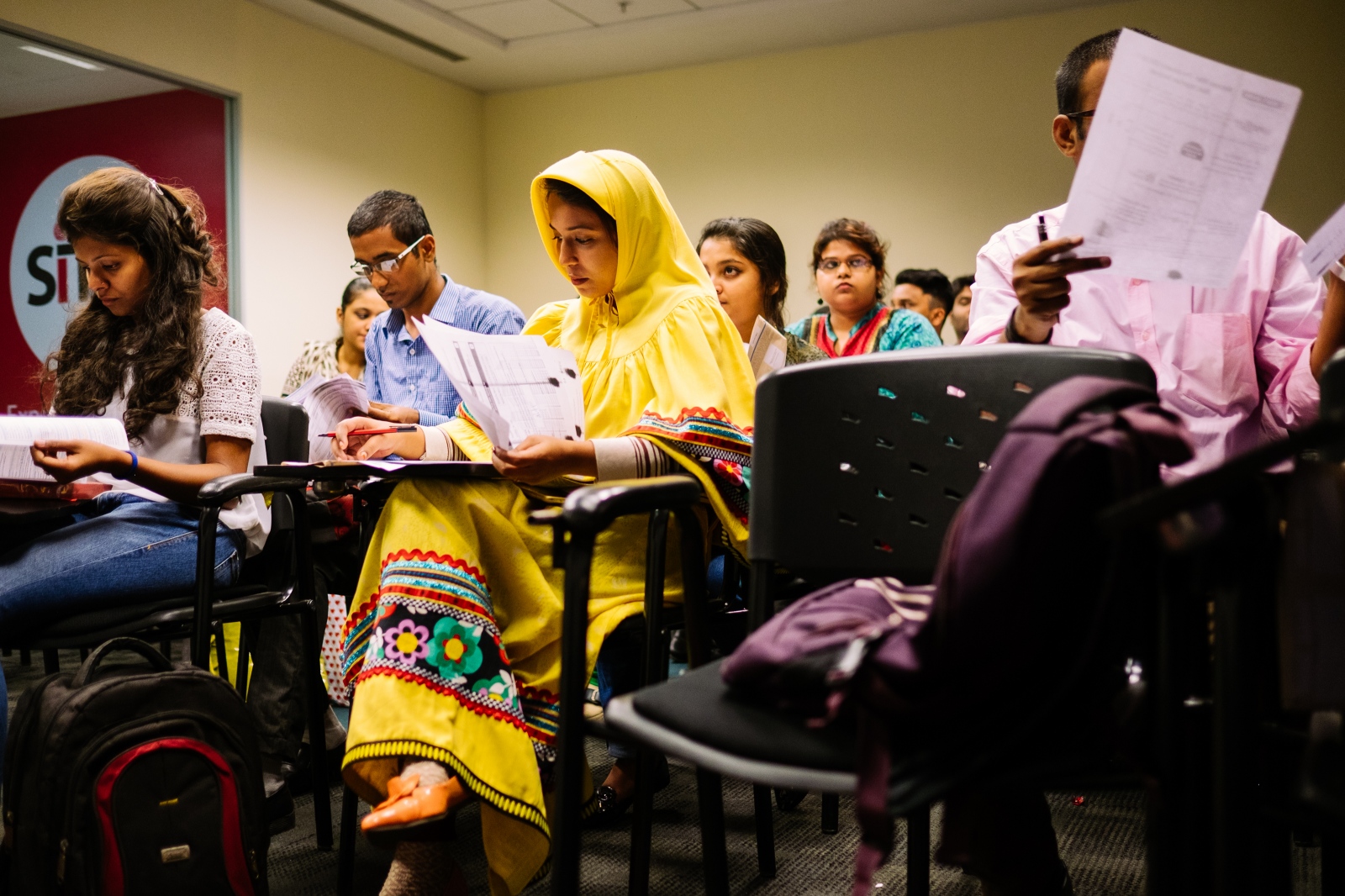 10 / 24
First training for new workers in SITEL. SITEL is an American company and  is one of the biggest call centre companies in the world. In their training the agents have to improve their American accent and learn more about the USA. They have to understand the American culture and how American people think. In this office 5,000 people are working, divided into many different rooms, and calling  different parts of the world. Mumbai, India. 28th March, 2016. 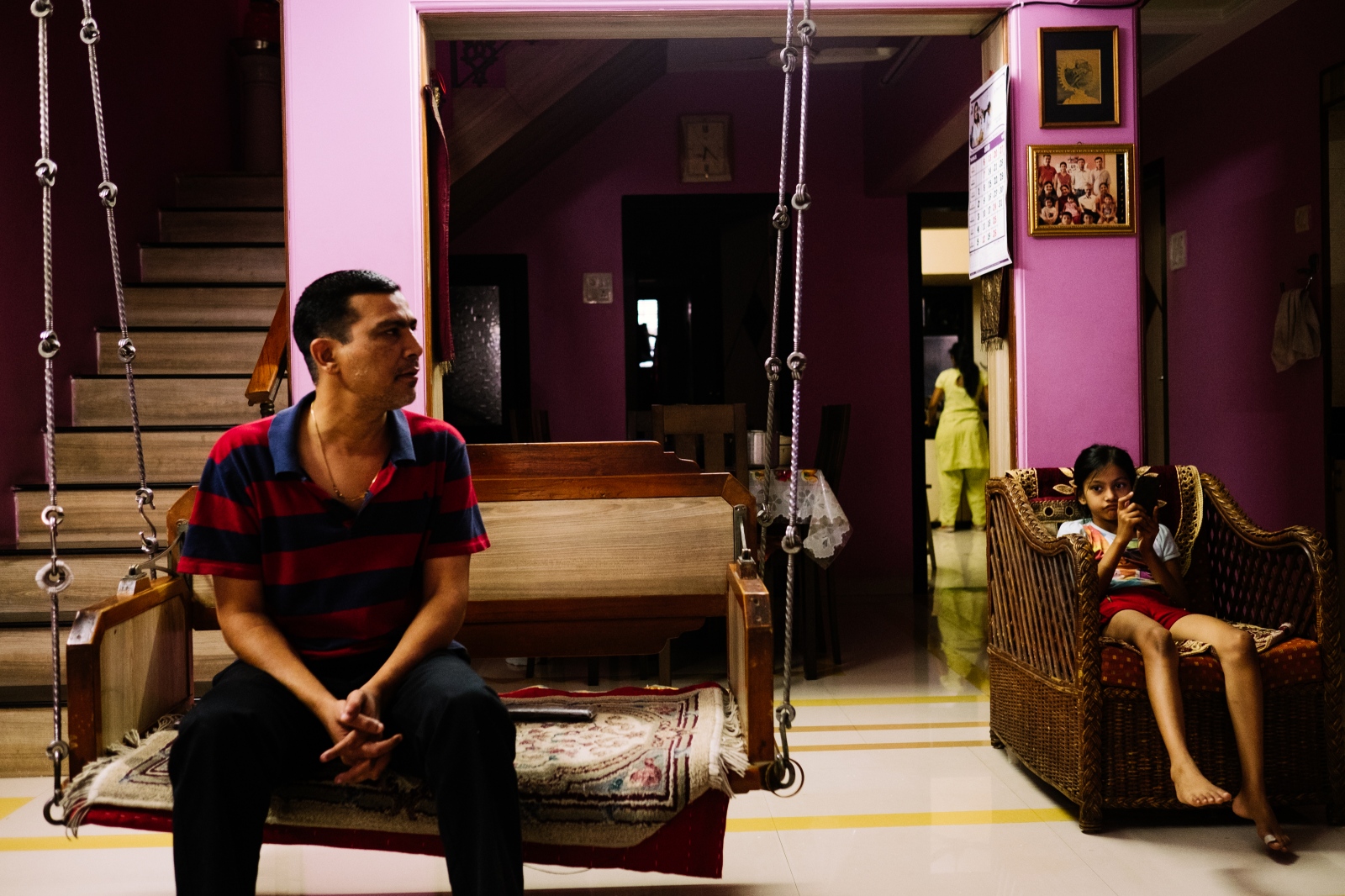 11 / 24
Rajender, 42 years old, at home watching cricket with his daughter while his wife cooks. Rajender started his career in a call center in 1999 and is now about to become a supervisor. “When I started in this business no one was aware of what this job was. For me internet and technology it was all a new thing. Once we start working in this business we have trainings on how to speak to the costumer, how to make the American accent. We have to develop a very fake accent to convince the client that they are speaking to someone in the USA.” Navi Mumbai, India. 13th March 2016. 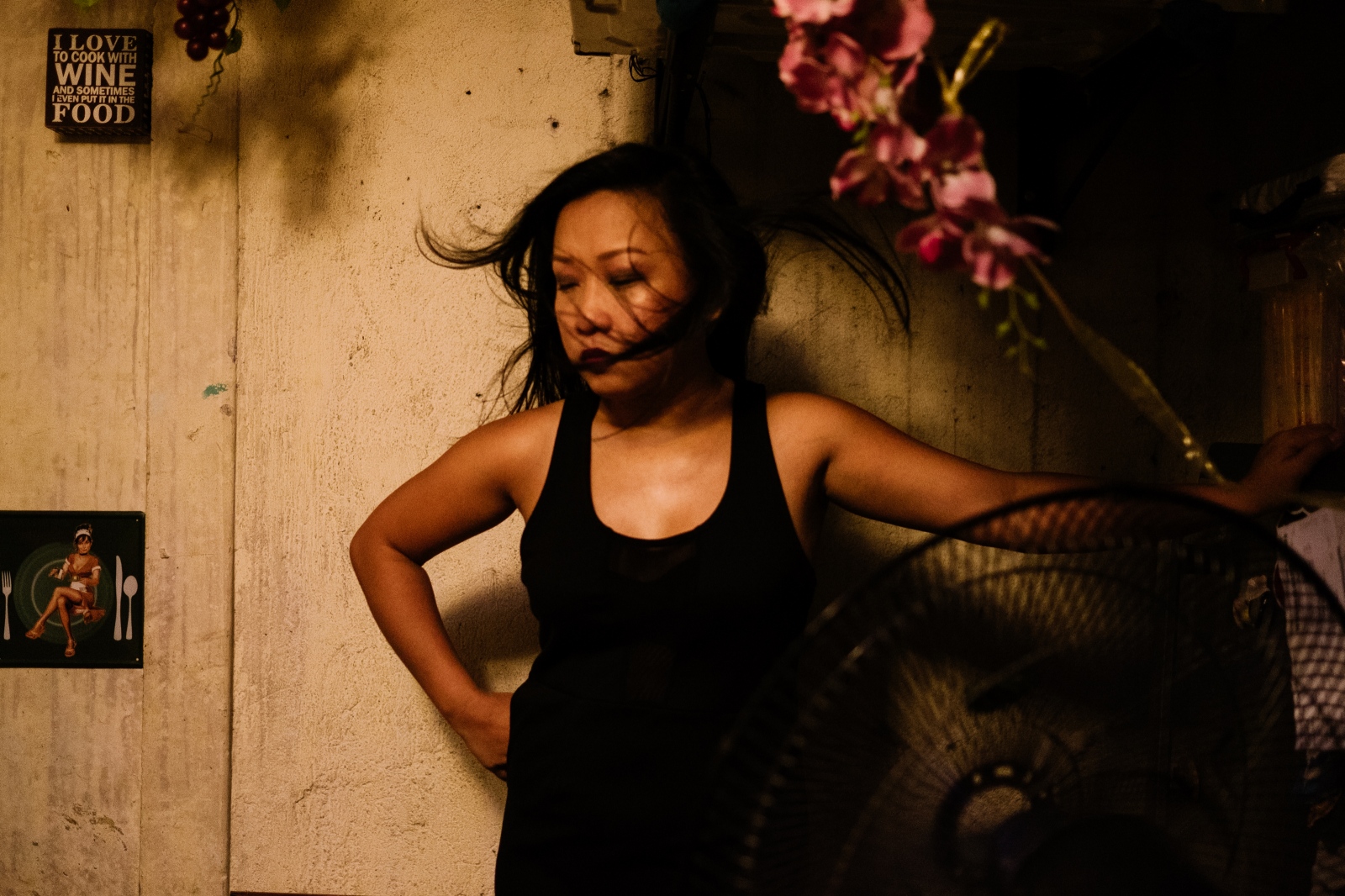 12 / 24
Christine, 34 years old, is drying her hair with a fan before going out with her friends on a Saturday night. Working at night in a call centre from Monday to Friday makes her to remain awake at night during weekends too. She worked in this business for the past 11 years.  Her wage had climbed in stages to around 700 USD in April 2016.  San Andrés Bukit, Manila. Philippines, 16th April 2016. 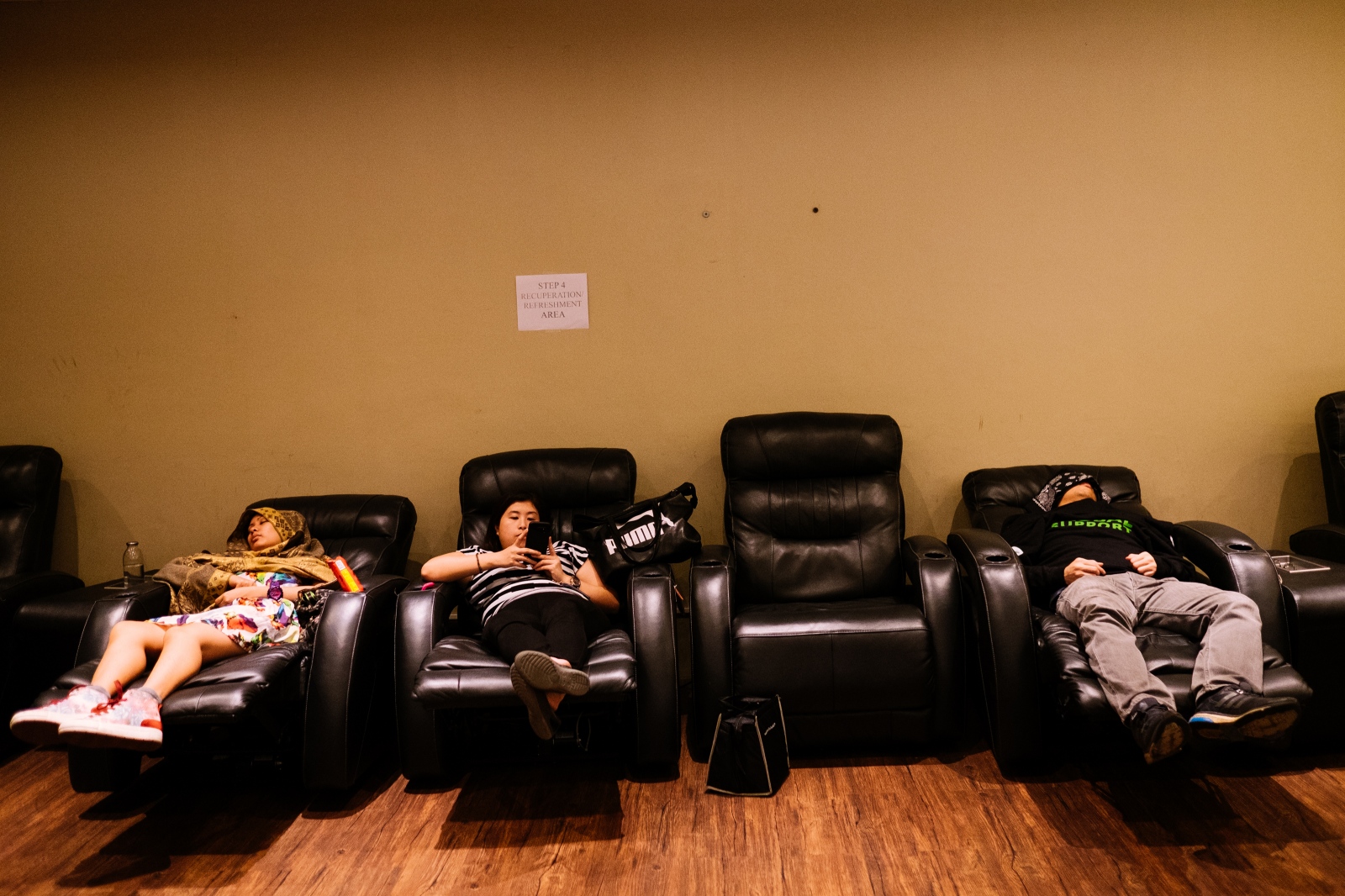 13 / 24
Three call centre workers resting at evening. In some companies in Manila workers can take a nap at day or night time during their break. Nevertheless this job can be so exhausting that is also common they fall asleep in their desk while working. Makati, Manila, Philippines. 7th April 2016. 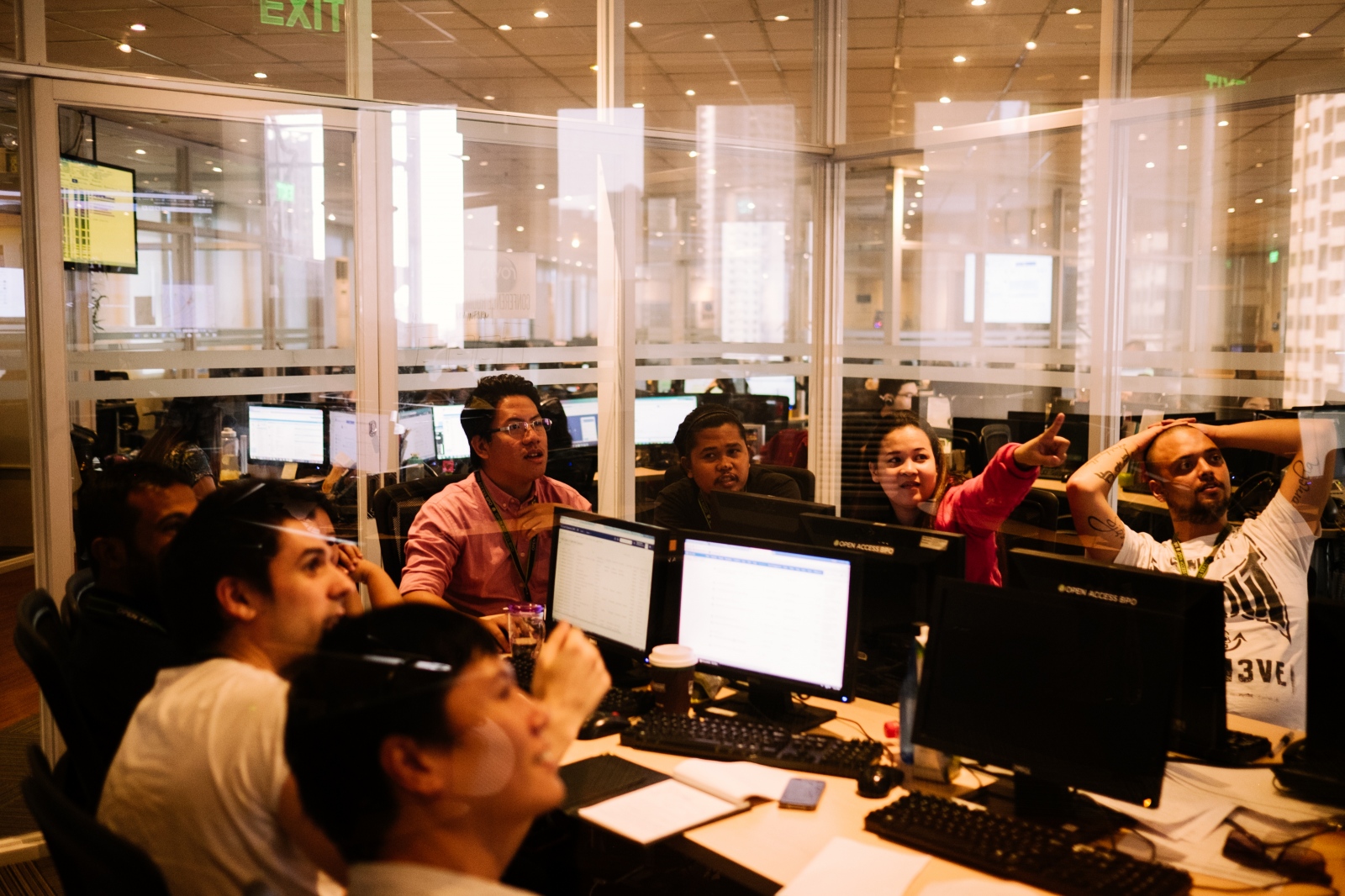 14 / 24
A team training in a small room in a call center in Makati. They are working for an account that organises adventure holidays world wide. Based in Manila these agents answer calls or emails and help customers from such places as Israel, Greece, Hungary or Cyprus to plan their trips. There is a big mix of nationalities and languages spoken in this floor. Some people moved from other countries to get a better wage in Manila. Other are Philippines who were born and grew up in Greece or Israel to where their parents emigrated 20 years ago and not finding a good job in these countries, moved back to the Philippines to work in the call center industry. Makati, Manila, Philippines. 8th April, 2016. 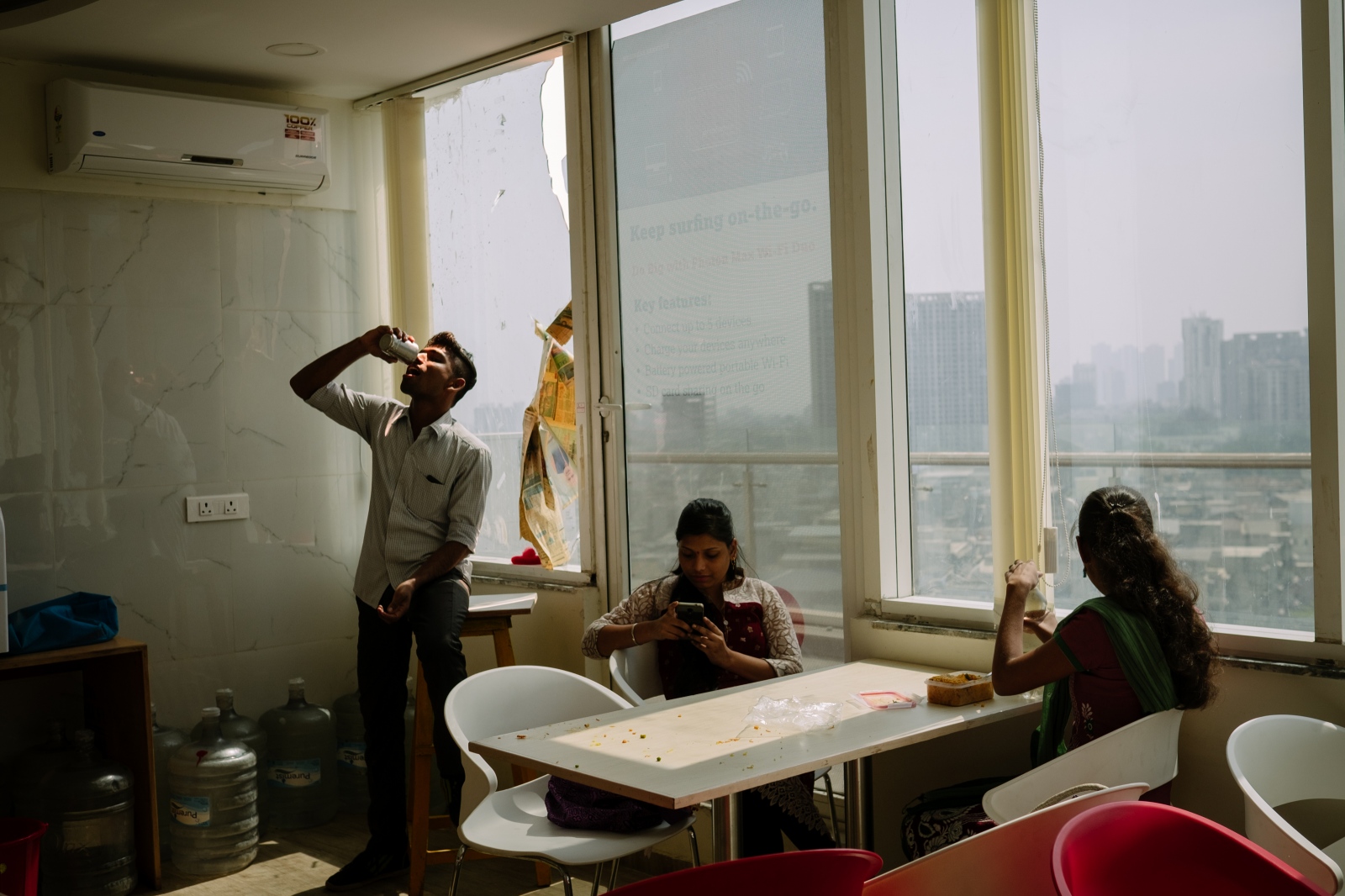 15 / 24
Three call centre workers enjoying their lunch break in a domestic call centre in Thane. Due to the fact that the Philippines overtook India in 2011, more Indian companies are focusing their business locally, calling Indian customers instead of those in the USA or UK.  Thane, Mumbai, India. 25th February 2016. 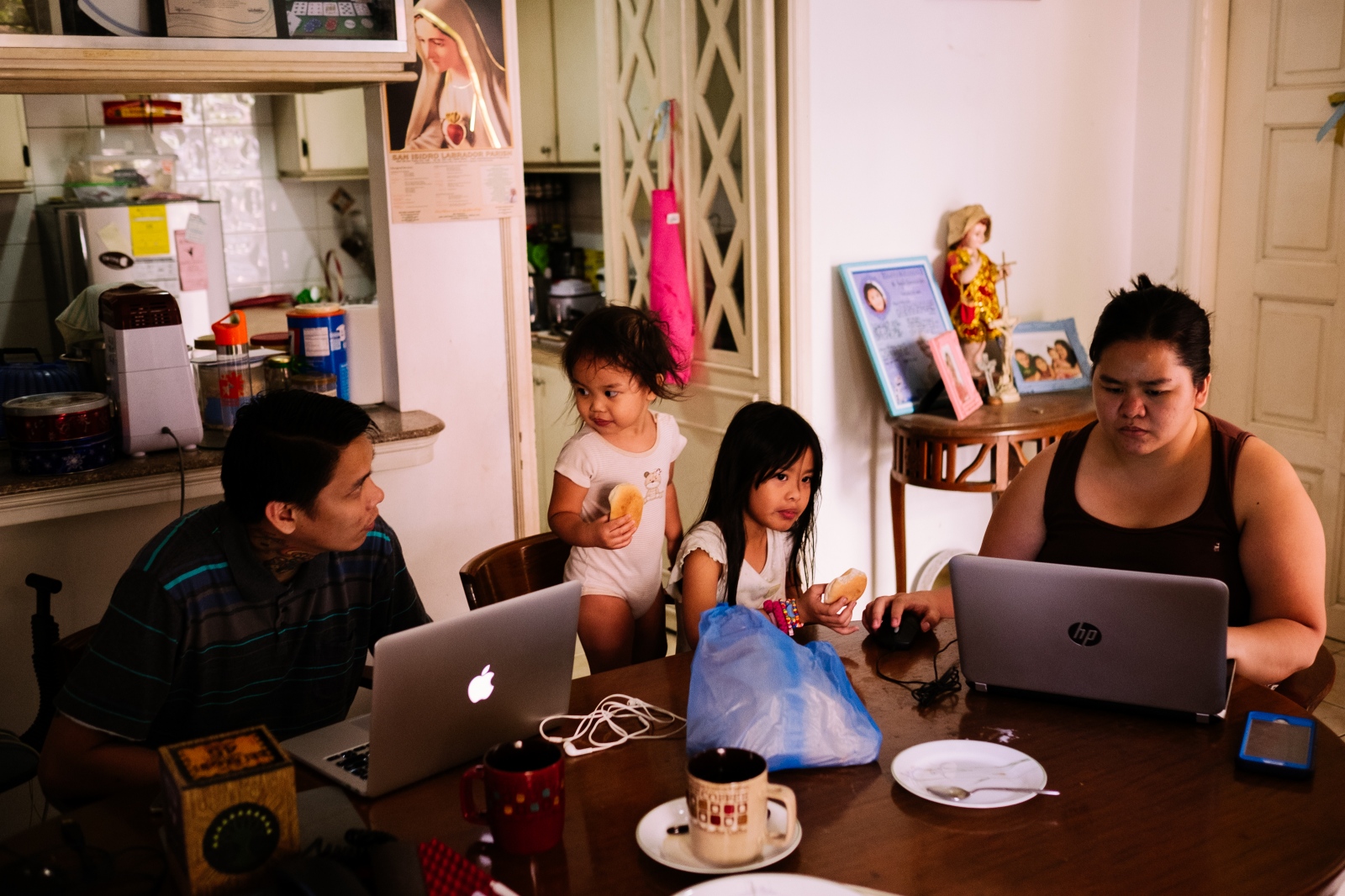 16 / 24
Michelle, 34 years old, and Ian, 33 years old, teleworking (working from home) while their daughters are having breakfast. Ian works during the night and Michelle during the day, breakfast is the only time they see each other. Manila, Philippines. 27th April 2016. 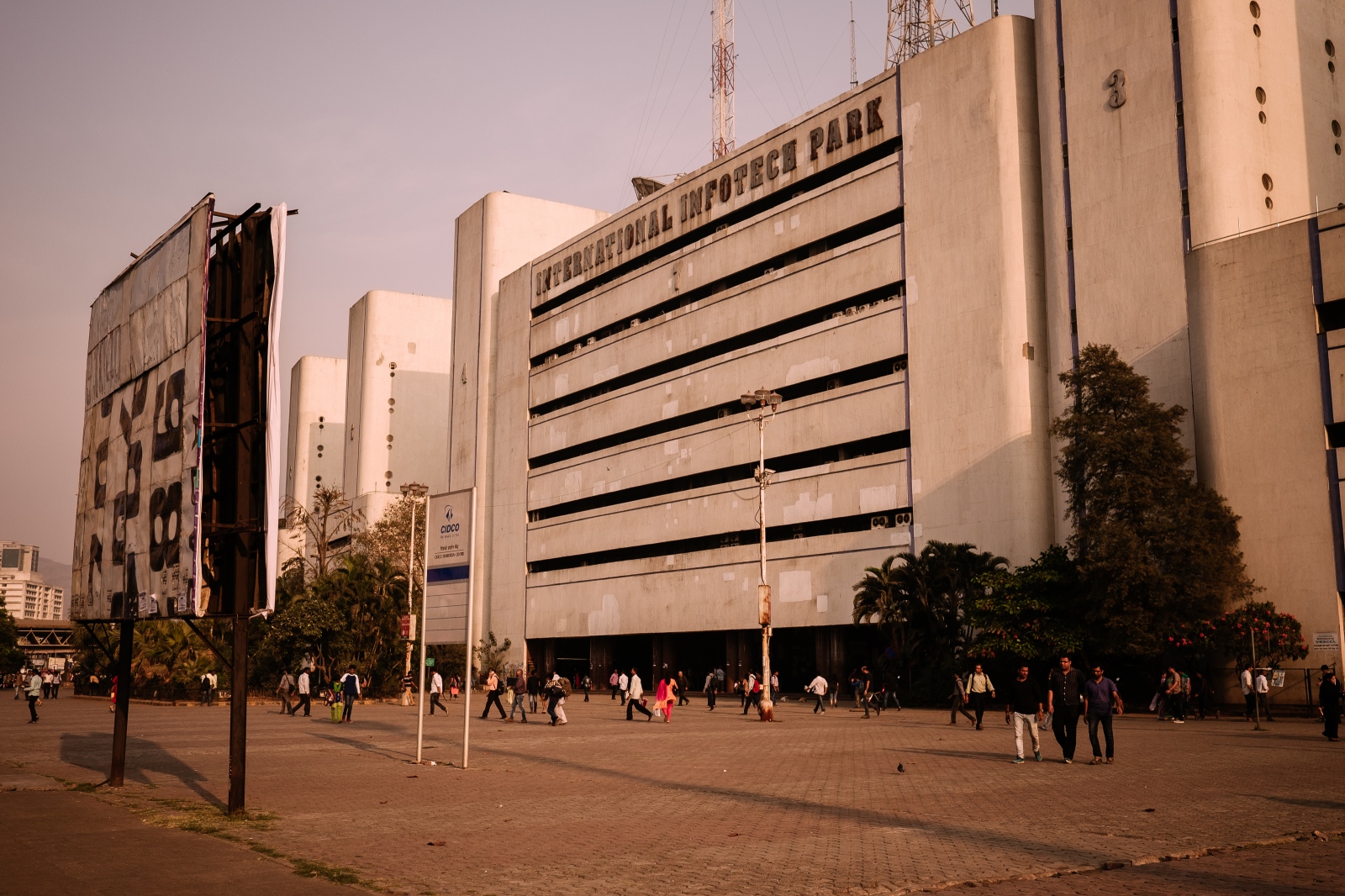 17 / 24
Outside view of a building where many call centre companies are based in Navi Mumbai. At this time of the day, in the evening, the work day shift is about to give place to the work night shift. The latter is when thousands of call centre Indian agents start calling the USA and the UK. Navi Mumbai, India. 3rd March 2016. 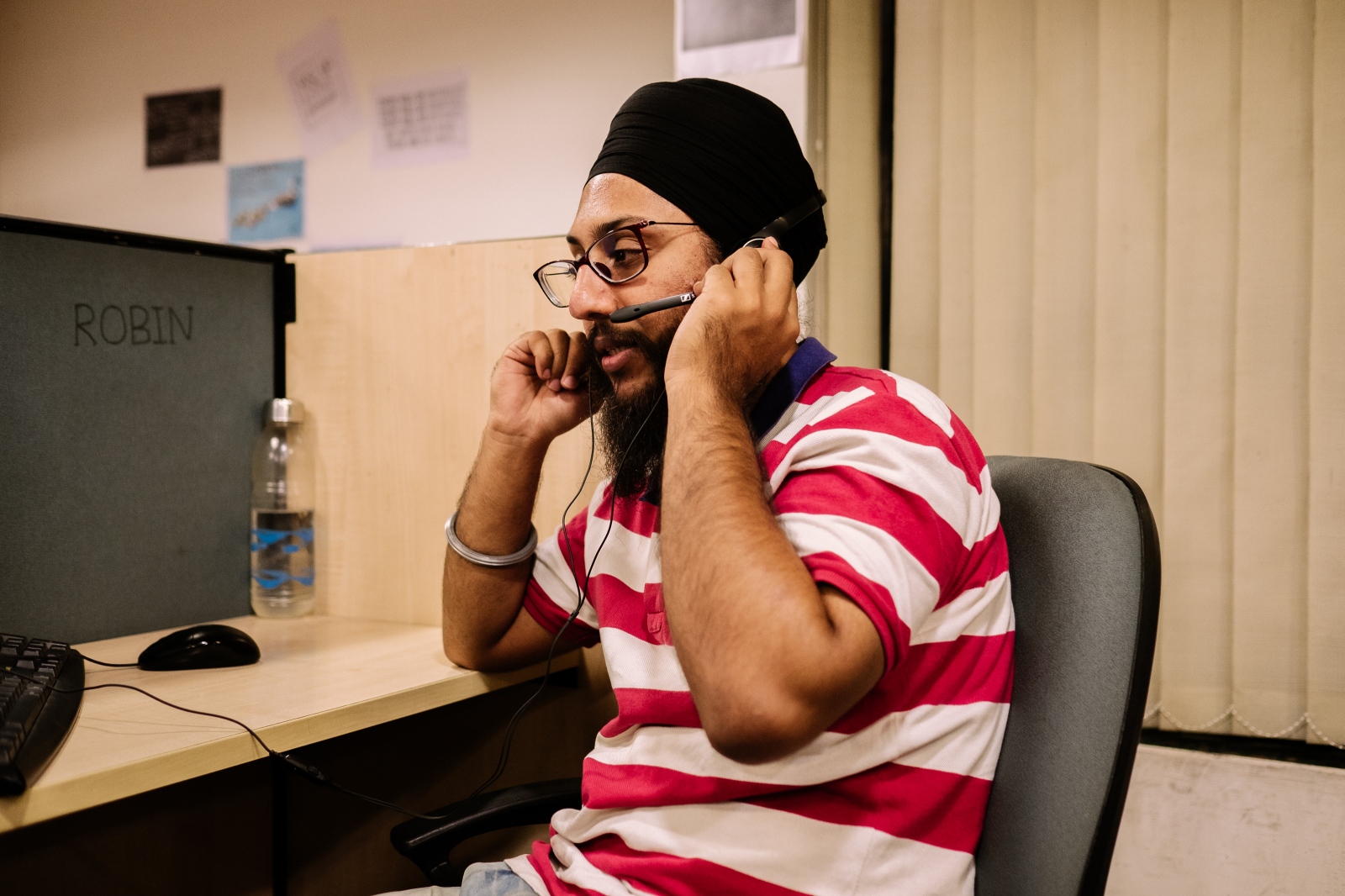 18 / 24
Depender (Robin), 22 years old. He started working in a call centre in May 2015. Robin is the name he chose to call the USA, doing technical support to Microsoft clients. Apart of working from Monday to Saturday, 8 hours a night, Depender is studying to a Masters’ degree at day time. After work he sleeps 3 hours and at 10 am he goes to college. Pune, India. 4th May 2016. 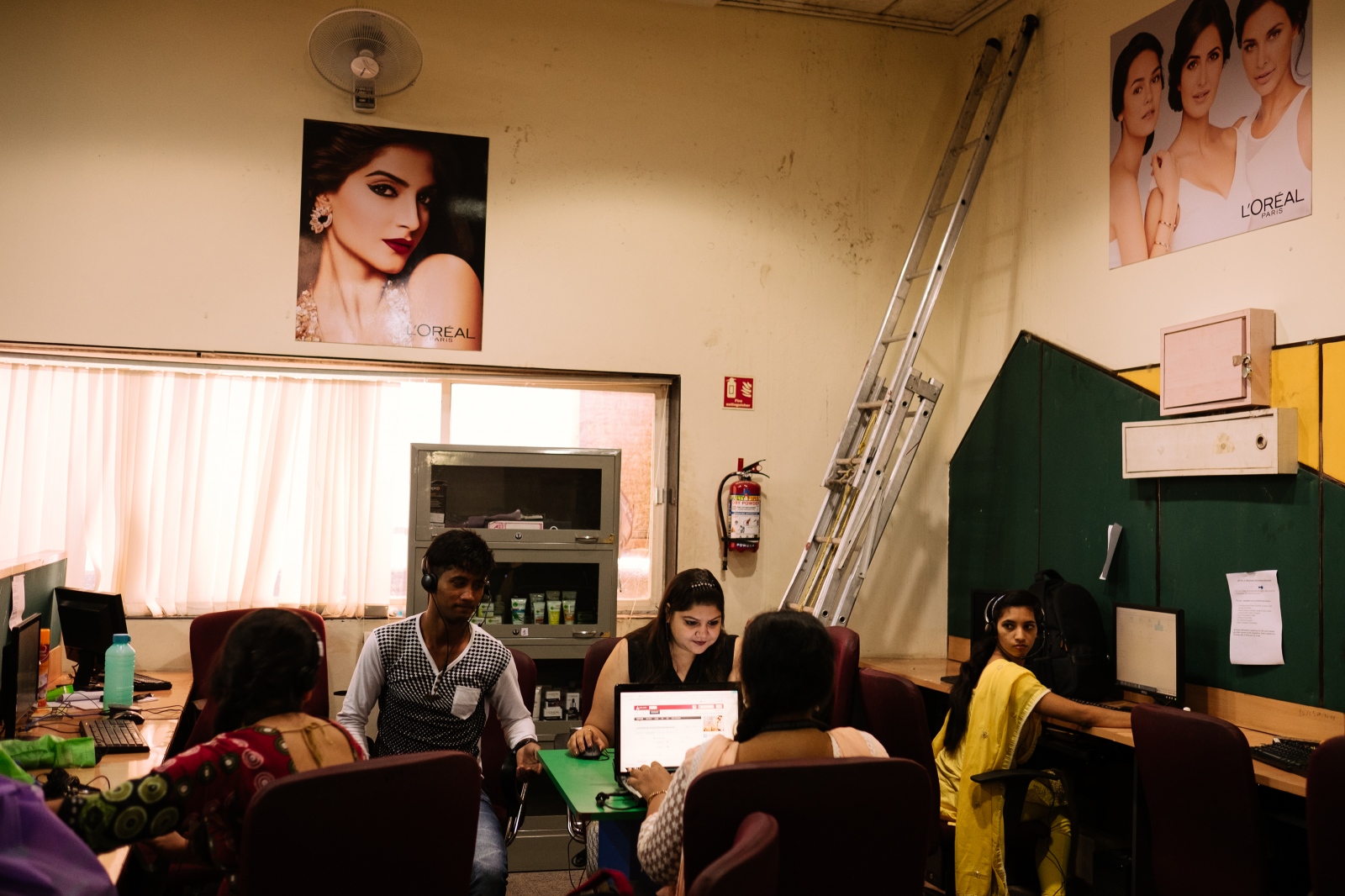 19 / 24
India, joined the call centre Industry in the mid´s 90´s, becoming one of the most important countries in the business and the world leader for many years. Due to the fact the country lost a lot of business to the Philippines the Indian companies started to invest also in domestic costumer service. Thus, currently call centres often have an International shift and a Domestic Shift. Here these call centre agents are working for L’Oreal India, at day time. Navi Mumbai, India, 8th  March 2016. 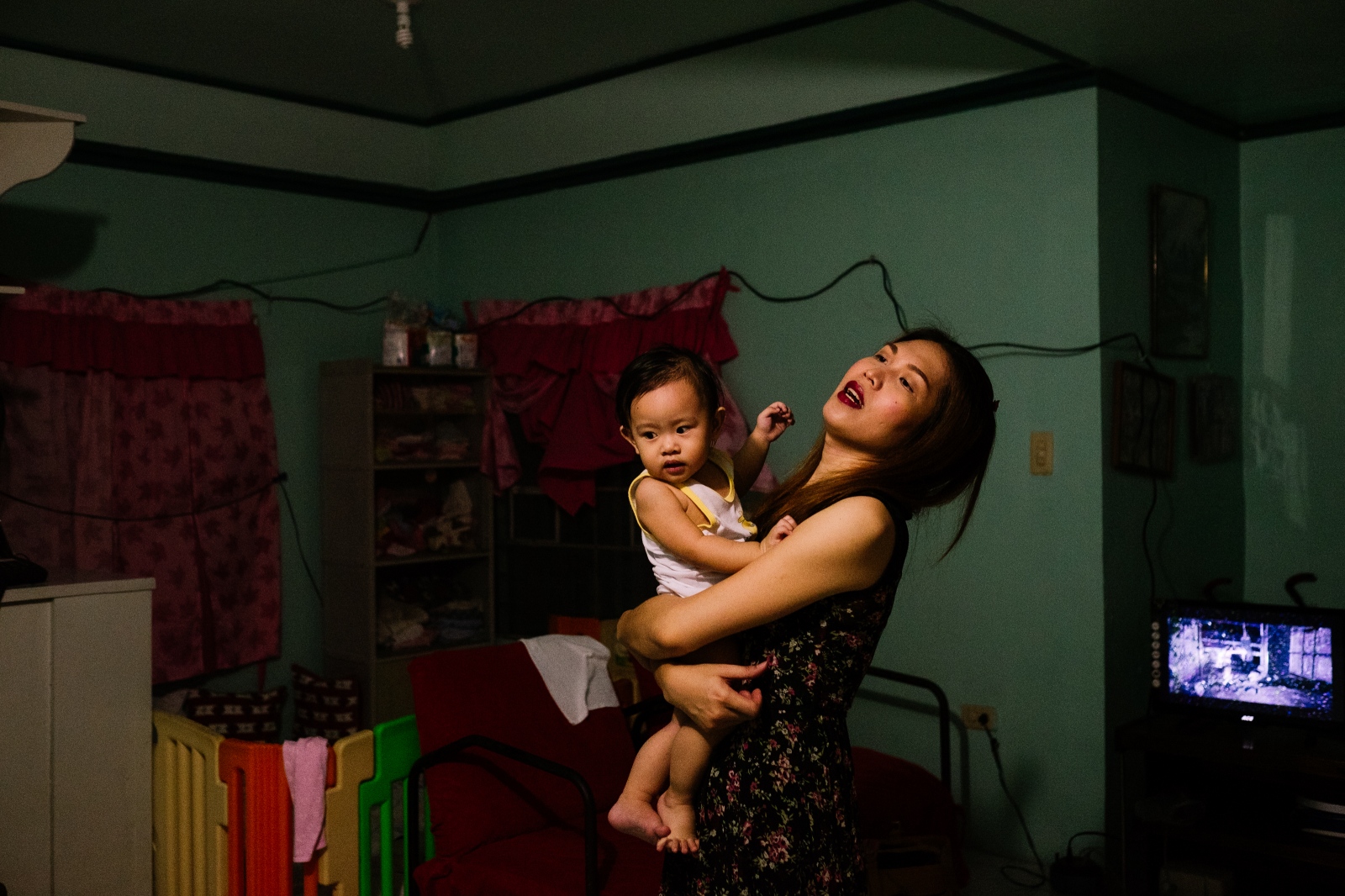 20 / 24
Bessie, (Rachel), 32 years old, at her house, she is getting ready to go to work while is taking care of her niece. She is a transgender who started working in a call centre in 2009. Unlike other businesses in the Philippines, call centres do not discriminate transgenders. “I started the transition when I joined this industry. I felt like I was accepted as I am so then I could change,” she said. Bessie quit studying to work and to pay her sisters’ studies and for a while she was the only one from the family who was bringing money home. After some time her sister fell pregnant, so now Bessie works night shifts calling North American customers and takes care of her niece while her sister works during the day.  Cavite, Manila, Philippines. 25th April, 2016 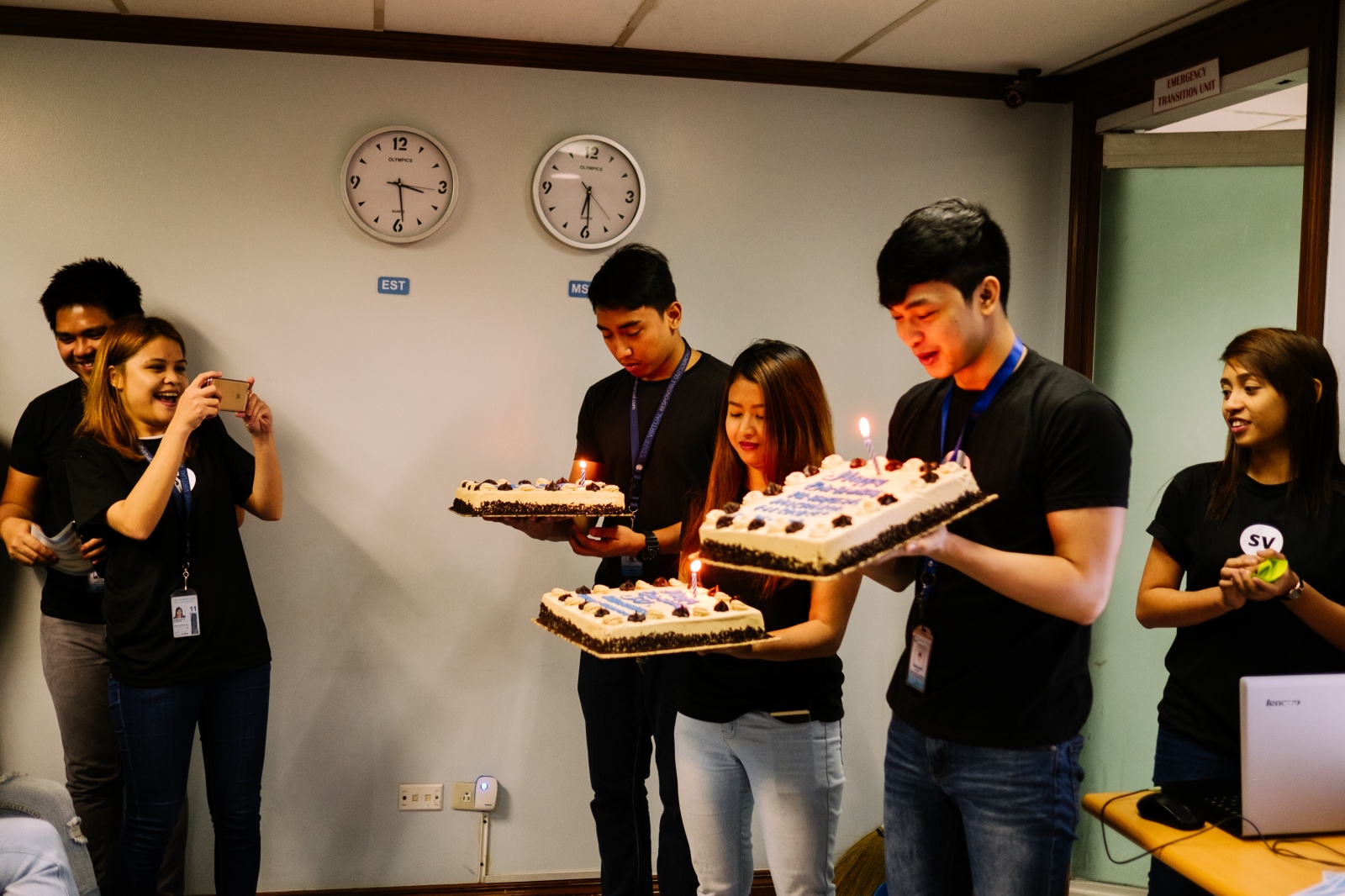 21 / 24
7Am. Once a month in this call center company, owned by Americans, there is an informal meeting to celebrate every birthday from that month. These 3 birthday people were just about to finish their night work shift. Makati, Manila, Philippines. 15th April, 2016. 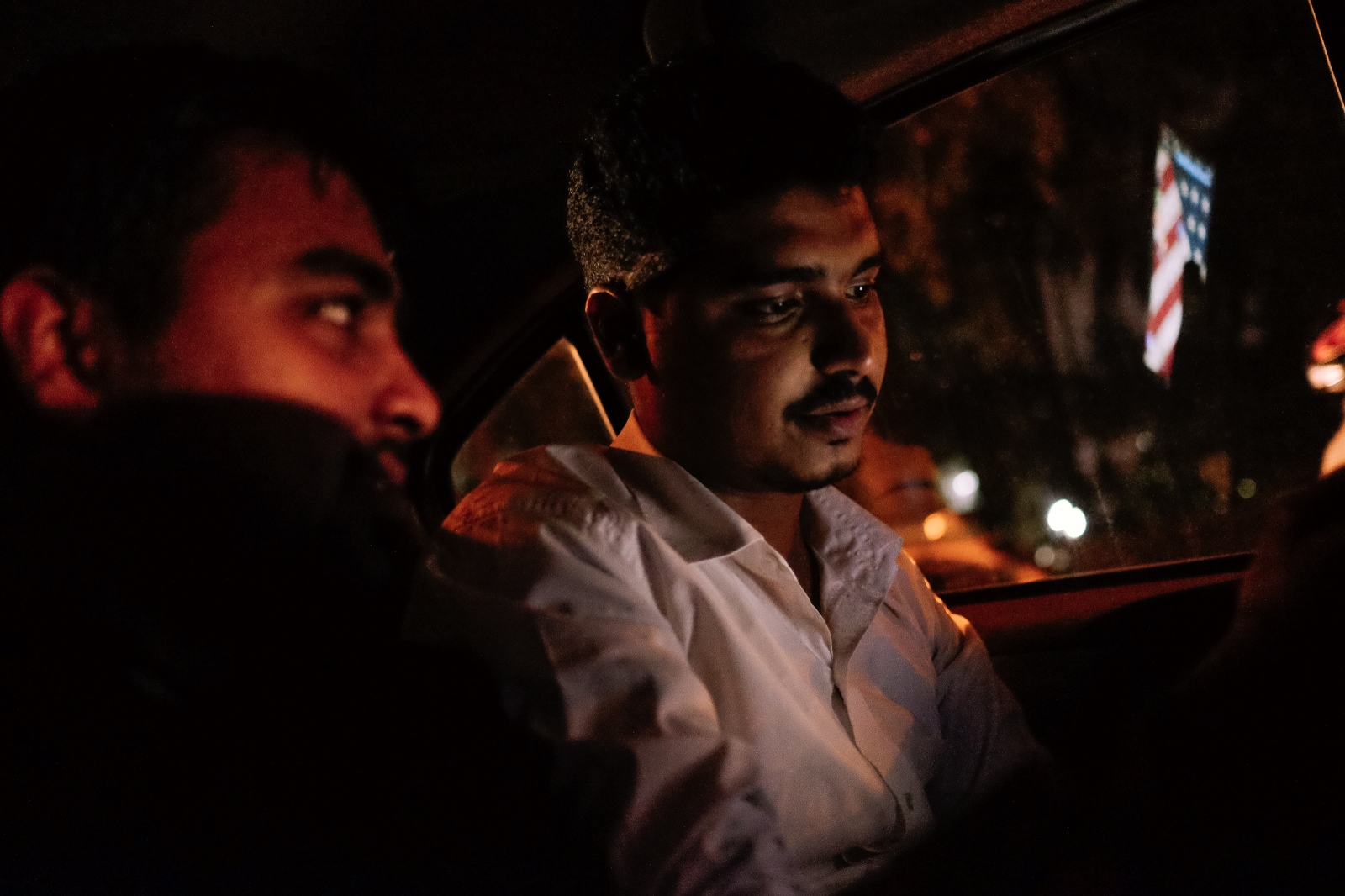 22 / 24
Ashrafali, (21), on his phone, is going out with friends to celebrate his birthday. He moved recently from a night shift to a day shift. “In my other company doing night shift it was too much pressure. I used to make 200 calls per night to the USA.” Before, he was trained to become a pilot but due to financial problems he started working in a call centre to save money and fulfil his dream. The Pilot course in India costs around 45,000 USD. Navi Mumbai, India. 11th March 2016. 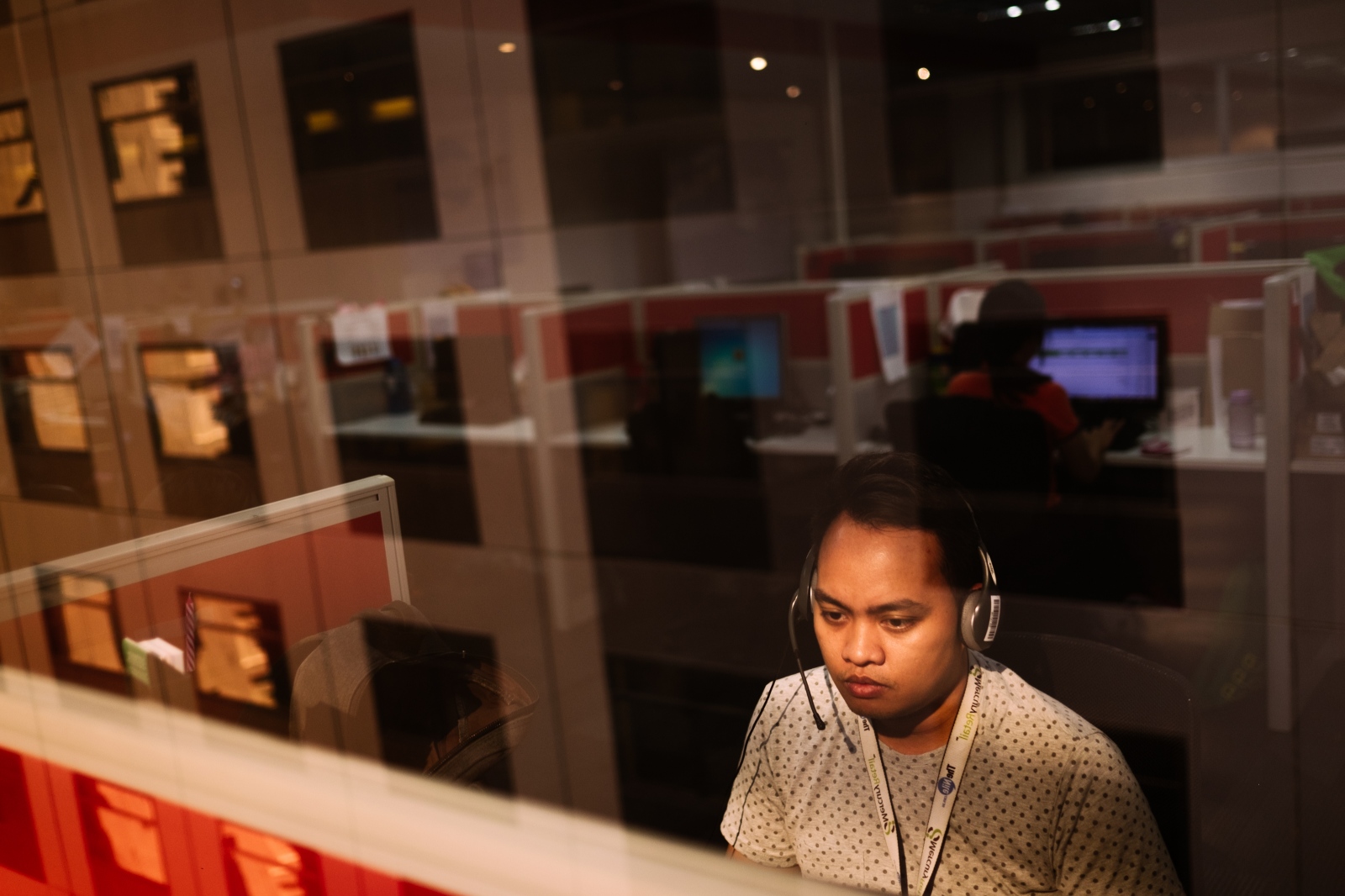 23 / 24
Erikson, 26 years old,  is working on an Australian account. Bonofacio, Manila Philippines. 19th April 2016. “In a call centre my life changed financially. Here I finally earn and can save good money,” he said. 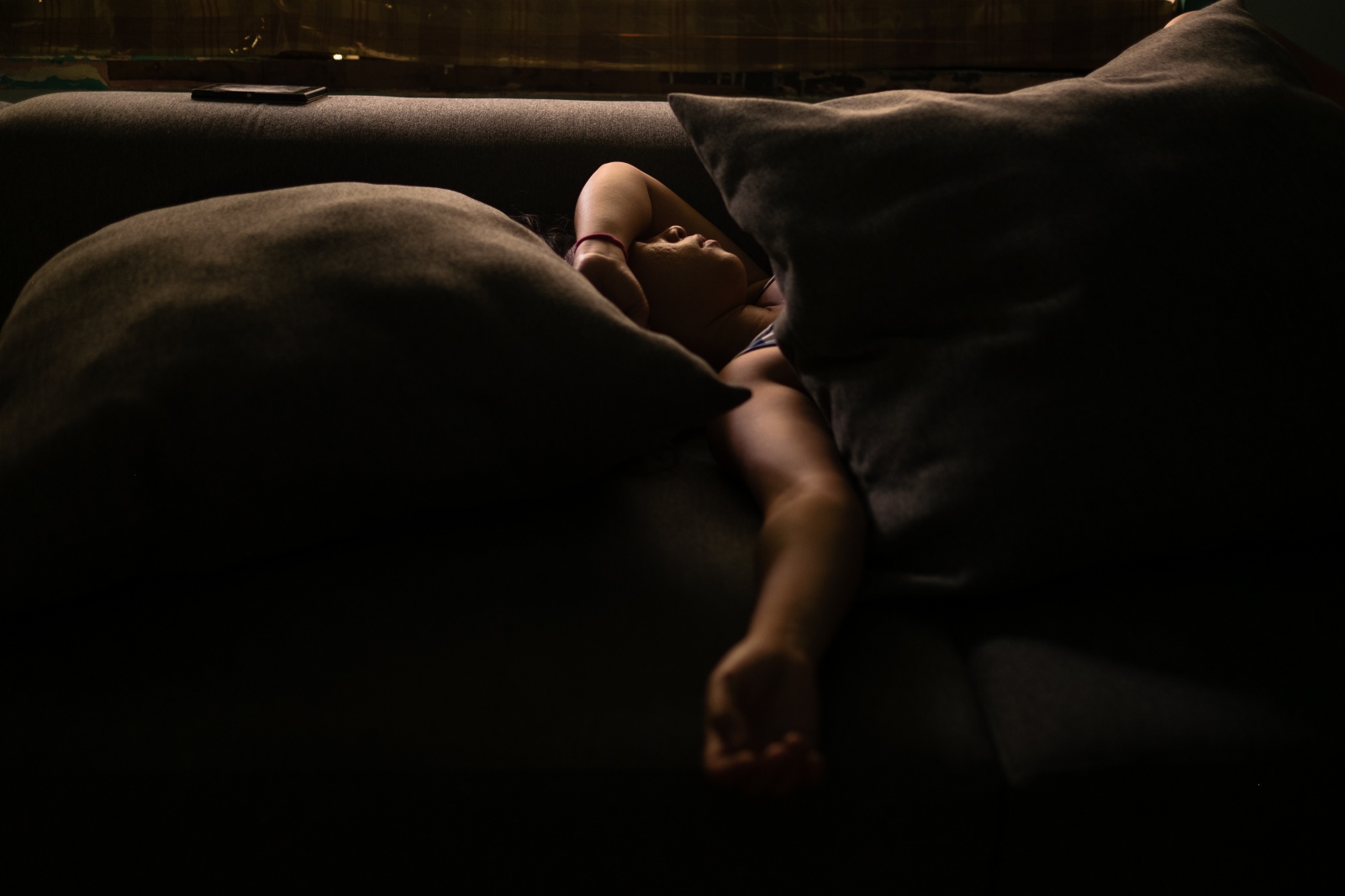 24 / 24
Christine, 34 years old, fell asleep on her sofa after returning home from her night shift.Working on the American time, Christine gets confused about what day it is in the calendar. “We basically follow US time. Even the calendar. If it´s the 24th here, in the USA it´s still the 23rd,” she said. San Andrés Bukit, Manila, Philippines. 13th April 2016.